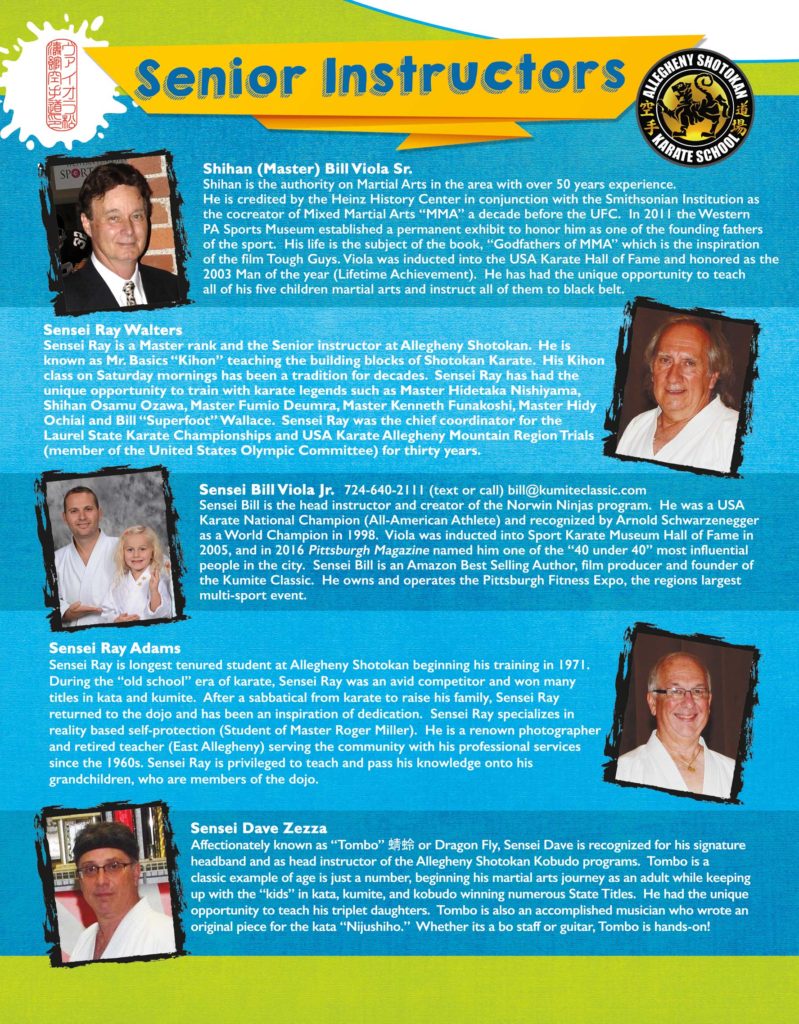 Shihan (Master) Bill Viola Sr. Shihan is the authority on Martial Arts in the area with over 50 years experience. He is credited by the Heinz History Center in conjunction with the Smithsonian Institution as the cocreator of Mixed Martial Arts “MMA” a decade before the UFC. In 2011 the Western PA Sports Museum established a permanent exhibit to honor him as one of the founding fathers of the sport. His life is the subject of the book, “Godfathers of MMA” which is the inspiration of the film Tough Guys. Viola was inducted into the USA Karate Hall of Fame and honored as the 2003 Man of the year (Lifetime Achievement). He has had the unique opportunity to teach all of his five children martial arts and instruct all of them to black belt.

Sensei Ray Walters Sensei Ray is a Master rank and the Senior instructor at Allegheny Shotokan. He is known as Mr. Basics “Kihon” teaching the building blocks of Shotokan Karate. His Kihon class on Saturday mornings has been a tradition for decades. Sensei Ray has had the unique opportunity to train with karate legends such as Master Hidetaka Nishiyama, Shihan Osamu Ozawa, Master Fumio Deumra, Master Kenneth Funakoshi, Master Hidy Ochiai and Bill “Superfoot” Wallace. Sensei Ray was the chief coordinator for the Laurel State Karate Championships and USA Karate Allegheny Mountain Region Trials (member of the United States Olympic Committee) for thirty years.

Sensei Bill Viola Jr. 724-640-2111 (text or call) bill@kumiteclassic.com Sensei Bill is the head instructor and creator of the Norwin Ninjas program. He was a USA Karate National Champion (All-American Athlete) and recognized by Arnold Schwarzenegger as a World Champion in 1998. Viola was inducted into Sport Karate Museum Hall of Fame in 2005, and in 2016 Pittsburgh Magazine named him one of the “40 under 40” most influential people in the city. Sensei Bill is an Amazon Best Selling Author, film producer and founder of the Kumite Classic. He owns and operates the Pittsburgh Fitness Expo, the regions largest multi-sport event.

Sensei Ray Adams Sensei Ray is longest tenured student at Allegheny Shotokan beginning his training in 1971. During the “old school” era of karate, Sensei Ray was an avid competitor and won many titles in kata and kumite. After a sabbatical from karate to raise his family, Sensei Ray returned to the dojo and has been an inspiration of dedication. Sensei Ray specializes in reality based self-protection (Student of Master Roger Miller). He is a renown photographer and retired teacher (East Allegheny) serving the community with his professional services since the 1960s. Sensei Ray is privileged to teach and pass his knowledge onto his grandchildren, who are members of the dojo.

Sensei Dave Zezza Affectionately known as “Tombo” 蜻蛉 or Dragon Fly, Sensei Dave is recognized for his signature headband and as head instructor of the Allegheny Shotokan Kobudo programs. Tombo is a classic example of age is just a number, beginning his martial arts journey as an adult while keeping up with the “kids” in kata, kumite, and kobudo winning numerous State Titles. He had the unique opportunity to teach his triplet daughters. Tombo is also an accomplished musician who wrote an original piece for the kata “Nijushiho.” Whether its a bo staff or guitar, Tombo is hands-on!